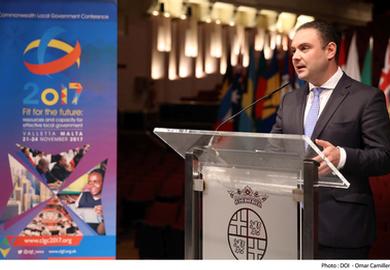 CLGF’s next biennial conference, the 2017 Commonwealth Local Government Conference will take place is Valletta, Malta from 21-24 November 2017 on the theme Fit for the future: resources and capacity for effective local government. This is the first time the conference has been held in Malta and will be hosted by the Government of Malta through the Ministry of Justice, Culture and Local Government and the Local Councils Association of Malta.

The announcement was made at a launch in Valetta on 4 May with Minister for Justice, Culture and Local Government Hon Owen Bonnici, LCA President Dr Marc Sant, Parliamentary Secretary for Local Government Stefan Buontempo, and CLGF Secretary-General Carl Wright. There was also a special message of support from Prime Minister Hon Dr Joseph Muscat, who is also current Chairperson-in-Office of the Commonwealth.

The conference will bring together over 500 senior policy makers to discuss strategies for boosting local government’s resource base and capacity to improve performance, service delivery and ensuring it is fit for purpose to meet the demands of the future.

Speaking at the conference launch event in Valletta on 4 May, where the logo for the 2017 conference was unveiled, CLGF Secretary-General Carl Wright said, “We are delighted that Malta has been selected to host this prestigious event, especially in view of the fact that Prime Minister Joseph Muscat is currently Chairperson-in-office of the Commonwealth following the successful hosting of the Commonwealth Heads of Government Meeting last November. Malta provides many examples of good practice, especially for small island states of which there are many in the Commonwealth.”

In a pre-recorded video message aired at the launch, Prime Minister Hon Dr Joseph Muscat described the conference as a “forum where people from different localities, cities and towns around the world share their experiences and best practices.” Watch video

Outcomes of the conference will be used by CLGF members in their own policy making and service planning and be presented to Commonwealth Heads of Government at their next meeting in the UK in 2018 for endorsement.

More information will be available shortly on the conference website www.clgc2017.org