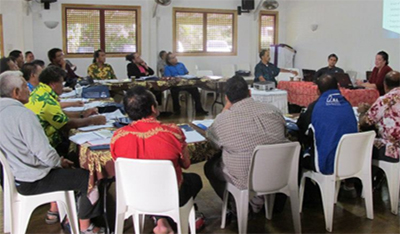 Included amongst many thematic discussions at the forum were the mechanisms for the deepening of local democracy through greater community participation, which immediately raised the concept of representative versus participatory local democracy. We live in, and politicians represent, societies that are divided socio-economically and it is important for politicians and officials to serve all sectors of the community, not just the sector which elected them. I recounted the story of two mayors from my past experience in local government. One who, based on his election victory, felt that he now did not need to consult in depth with the community as they had elected him. I fundamentally disagreed with this – an election mandate was given only by those who elected him and he now needed to represent the entire community, particularly on issues which could fundamentally affect them. This was contrasted with a mayor who, early on in her tenure, embarked on a mayor’s listening campaign – meeting all sectors of the community from wealthy developed neighbourhoods to informal settlements, after hours, over a period of weeks, to do precisely that – to listen!

I also reflected on two community stories in their engagement with local government. In one, the local council and marginalised sectors of the community jointly planned a primary health care facility which focussed on HIV, gender based violence and other services. This community felt that this was their clinic. Some of the staff were recruited from the community itself and members of the community also served on the management board. It was a powerful example of conjoined action between a community and a local council. Recently in the UK, we witnessed a breakdown in that engagement between communities and local government with the Grenfell Towers fire and tragic loss of life; both in the early warnings from the community on fire safety and then in the local council response in the immediate aftermath of the fire.

CLGF prides itself on working across both democracy and development. At the CLGF Conference in Malta in November 2017 we will look at how we resource local government not only for development, but also to deliver on its democracy mandate. Aligning democracy and development creates the foundation for powerful action, but this cannot be an esoteric or academic statement. If we truly believe in the role of local government we also need to put communities at the centre of both.

Today marks the 4th anniversary of the Jo Cox Foundation. Jo Cox was a committed, passionate and effective UK Parliamentarian. The Foundation was established in 2016 by Jo's friends and family to buil ...
© CLGF 2020 : Privacy Policy