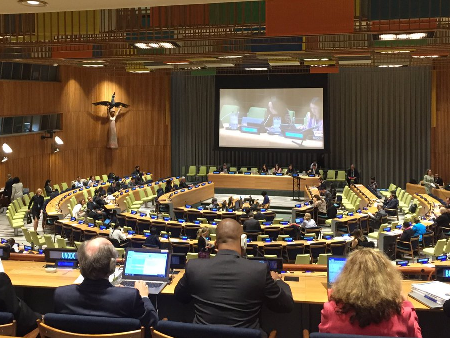 There needs to be a fairer distribution of public revenues between levels of government and local government’s capacity to collect its own resources should be strengthened so that local government can be properly resourced to meet its commitments, said Mayor Darrell Bradley speaking at the experts round table session on Domestic and international public resources as part of the local government discussions leading in to the ECOSOC Forum on Financing for Development in New York from 22-15 May 2017.
Mayor Bradley was speaking on behalf of CLGF as a member of the delegation of the Global Taskforce of Local and Regional Governments, which brings together global and regional networks of local governments to press for local governments role in development at key international forums including the inclusion of local and regional governments in the decision-making process of the Financing for Development Forum.
Mayors and representatives of local and regional governments provided some key insight on the challenges of local government revenue generation.
Mayor Bradley noted that sub-national government can generate as much as 40 per cent of public investment, but this requires decentralisation and enabling legal frameworks.
He explained that, in Belize, as transfers from central government are only 6 per cent of the budget, local governments rely on own source revenues such as property taxes, licencing fees and other user fees. In 2013 the Belize City Council successfully floated a US$ 10 million bond to finance street infrastructure, with an opportunity to re-subscribe at certain intervals, allowing the council to tap into additional funds.
He said that there needs to be sufficient autonomy of resources for local government to deliver its potential for sustainable economic, environmental and cultural development.
“We must all join our efforts to leave no-one behind and channel the abundant global resources to the territories where they are most needed,” said Mayor Bradley.
“We must continue building on the commitments of paragraph 34 of the Addis Ababa Action Agenda to achieve sustainable development.”