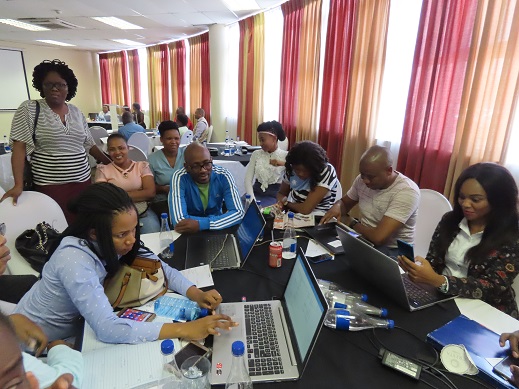 Local government in Botswana has been benefitting from training under CLGF’s Southern Africa Regional Programme, funded by DFID. Officials from ten Local authorities took part in a four-day training workshop entitled: Strategy Development for Local Economic Development (LED), held at the end of November in Palapye.

The aim of the training was to develop a common understanding about the process of developing an LED strategy and enhance the capacity to implement, monitor and evaluate. As well as equipping participants with the skills to develop district LED strategies and corresponding monitoring and evaluation plans, the training also sought to agree on the way to make the plans a reality.

Deputy Director for the Ministry of Local Government and Rural Development, Ms Ntotang Swapo, opened the event and reminded participants that the training was part of the Upscaling Developmental Local Governance through Local Economic Development in Botswana project [2017-2020], a follow-up to the 2012-2016 project, both supported under CLGF’s Regional Programme in Southern Africa. She emphasised the need to ensure that no-one is left behind in LED planning and implementation and that the development planning process is rooted in consultation.

Support from LGA and Ministry

The workshop covered several subjects relating to LED, including: visioning; developing strategic objectives and projects; financial/investment plans; implementation; institutional arrangements; and monitoring, evaluation and risk management. Most importantly was the inclusion of mainstreaming of gender, climate change and other developmental issues as part of the training. Target local authorities were given the opportunity to draw up action plans to guide the creation of LED strategies in their respective districts. Post-training, the LED strategy formulation process will be supported by mentoring, provided by the Ministry of Local Government and Rural Development, CLGF and the Botswana Local Government Association (BALA).

CLGF's Southern Africa Programme Manager, Ms Nyasha Simbanegavi, said: "The four days’ training workshop was a resounding success and has laid a firm foundation for the formulation of LED strategies by the participating local authorities. The most important outcome was that workshop participants were able to apply the taught concepts through the various exercises that they were given, which is critical to the success of delivering effective LED strategies in each of the local authorities." There was agreement from BALA’s representative, Programme Officer Ms Mpho Fosi, who expressed her satisfaction with the training and reiterated BALA’s commitment to supporting the local authorities in the development of their LED strategies in their respective districts.