Call for special status for local government at Habitat III 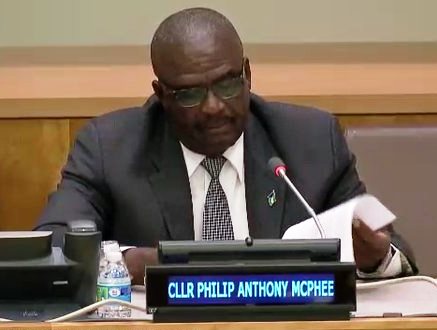 CLGF has joined forces with other local government bodies to call for a specific status for local and sub-national bodies to be represented at the table in the Habitat III discussions in Quito later this year which will focus on the New Urban Agenda (NUA). The Global Task Force, of which CLGF is a prominent member, is calling on UN member states to give local authorities special status to play their full role as active partners both at Habitat III and the overall UN system.

CLGF Vice Chair Cllr Philip McPhee and Secretary-General Carl Wright both addressed the Second World Assembly of Local and Regional Government for the New Urban Agenda in New York on 15 May and were part of the presentations to the Habitat III informal hearings with local authorities at the UN on 16-17 May. This is the first time there has been reserved sessions exclusively for local authorities, a significant move according to CLGF and its partners which they hope will establish a clear precedent in recognising local government as distinct stakeholder at the UN.

During the Assembly the Task Force launched a social media campaign #Listen2cities to support the voice of cities and local government being given special status in the NUA talks.

“If the NUA and the SDGs are to be successfully implemented, they need to be fully localised and local and regional governments, and their associations, need to have the capacity to be engaged with implementation,” said CLGF Vice-chair Cllr McPhee addressing the UN Habitat III hearings.

“It is gratifying that key development partners such as EU and DFID are already providing practical support in this area to local government, for example through CLGF, which has recently launched a regional programme in the Caribbean, based in Trinidad, to help its members engage with SDG implementation,” he said.

“The UN should ensure that the Global Task Force and its members like CLGF and UCLG can contribute directly to the global review of the NUA and the SDGs as key stakeholder: this means formal recognition needs to be given by ECOSOC to Local and Regional Government as a distinct stakeholder and appropriate mechanisms confirmed to facilitate this, for example by extending the remit and status of UNACLA the entire UN system and its agencies.”

Also addressing the hearings, CLGF Secretary-General Carl Wright said:
“There is little point in having a perfect text agreed in Quito which is rejected or ignored: too many international resolutions are forgotten as soon as they are signed after much to-do and excitement:  What matters is how the commitments entered into are followed up and are implemented in practice.

“This is why we should focus almost exclusively on the vital linkage between the implementation of the NUA and the SDGs of the 2030 Agenda for Sustainable Development,: having just expended so much political and other capital on concluding the 2030 Agenda only last year, it is highly unlikely that national governments will agree major new initiatives at Quito in 2016, especially if these entail significant financial commitments.

“What Quito, and what we as local and regional governments must demonstrate, is that the NUA is complimentary to the 2030 Agenda and will actively assist and support SDG implementation. The targets of the 2030 Agenda cannot be met properly unless they incorporates the urban dimension, and the co-option of local and regional governments in SDG implementation in partnership with central government will heighten the prospect of success,” he said.

“This Assembly represents a powerful and important global constituency. If there is a single message that needs to be conveyed to the UN, it is that local and regional government are sphere of government, alongside national government: we are not an unelected pressure group or NGO- this should be reflected in our status and role as a distinct stakeholder at the UN,” he concluded.