Cities and regions for development cooperation 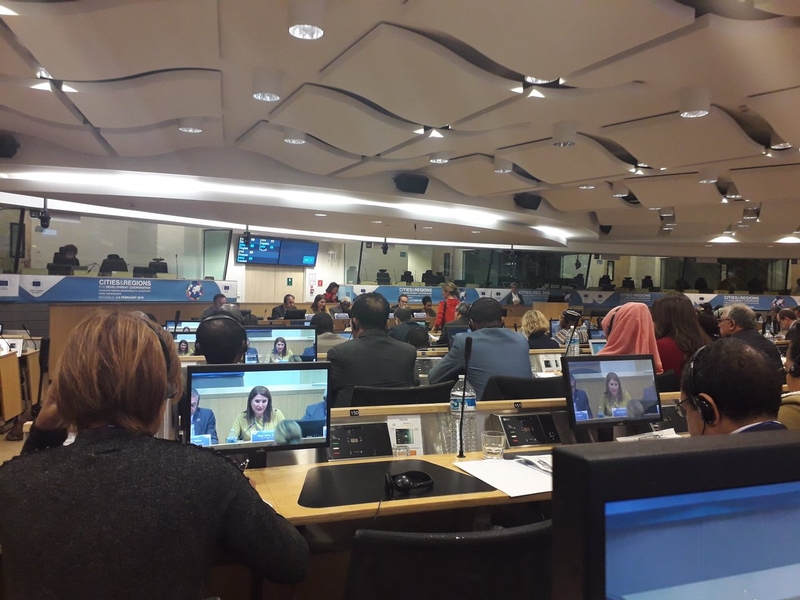 CLGF Programme Manager Claire Frost has been taking part in the Cities and Regions for Development Cooperation Forum 2019 in Brussels on 4 and 5 February.

With CLGF's flagship, biennial Commonwealth Local Government Conference – CLGC2019 - set to take place this August in Sri Lanka, Ms Frost was pleased to hear the Mayor of Mannheim, Peter Kurz, comment on the need for citizens to lead on setting their local approach to Agenda2030. This issue is at the heart of the conference, which has the theme - Citizen centred local government: driving inclusive social and economic change.

Organised jointly by the European Commission and the European Committee of the Regions, in Partnership with PLATFORMA, the Forum is the sixth of its kind and has been focusing on partnerships supporting urban development and helping deliver the Sustainable Development Goals (SDGs) at local and regional level.

The first part of the Forum brought together European Union decision makers with local government and policy experts to discuss the international policy framework for urban/local sustainable development and share experiences of successful partnerships between European and partner cities. Commissioner Neven Mimica restated the EU's commitment to working with local government to achieve the SDGs, looking both at development funds and at new funding sources such as the new funds to de-risk investment in partner countries.

The second half of the meeting allowed participants to raise topics of their choice, interact and generate insights and recommendations directed to the European institutions through an interactive Open Space methodology. These elicited a number of important views which were fed back to key Commission decision makers grouped around the 5Ps of Partnerships, Prosperity, Planet, People and Peace.

Henk Kindt, Deputy Mayor of Roeselare, reminded development partners that lighter systems are really what is needed to strengthen the effectiveness of development funds. Concrete outcomes are still possible without large amounts of funding.

Representing the Committee of the Regions, Franco Lacop stressed that for cities and regions to play their necessary role in the SDGs, they must be empowered and have the authority to act, through real subsidiarity.

On the second day of the forum, the Director-General of the DG for International Cooperation and Development (DEVCO) Stefano Manservisi declared his strong belief that a permanent, structured dialogue with Local Authorities needs to be established as most of the SDGs targets will be achieved at local level.

There was a call to strengthen multi-lateralism by Member of the European Union, Linda McAven, to face the global challenges with the contribution of local authorities.

Feeding back from discussions on Partnerships, Prosperity, Planet, People, Peace balancing concrete recommendations on framework, reducing co-funding & smaller funding envelopes, with inclusive holistic visions for future local development including the full participation of all members of the community in decision making and priority setting.

There was an important reminder from the UCLGAfrica Secretary-General, Jean-Pierre Elong Mbassi, on the integrated territorial nature of work for local government. Cities and regions are moving beyond the sector focus of national governments to affect holistic change on the ground. Hans Janssen of the Committee of the Regions also echoed this when he said that, while linking with each other is important, so too is linking policy programmes. He urged everyone to be partners in policy and in the way of working together.

No local authorities: no SDGs

EuropeAid's Planet and Prosperity Director, Carla Montesi, declared that the SDGs cannot be achieved without the active involvement of local authorities; with Joaquim Oliveira Martins, Deputy Director at the OECD, sharing new work being taken forward on the role of cities and regions in achieving the SDGs, focusing on data and M&E, and decentralised cooperation.