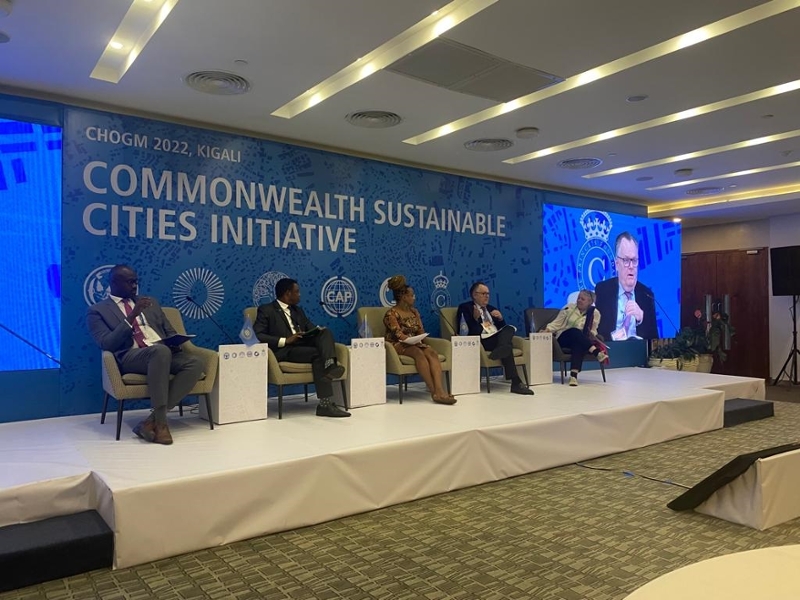 CLGF flew the flag for local government at the 2022 Commonwealth Heads of Government Meeting, held last month in Rwanda, with a number of activities, including an Official Side Event. This resulted in Heads of Government referencing the importance of a stronger focus on sustainable urbanisation and work at the local level in the official Communique.

The Commonwealth Heads of Government Meeting, or CHOGM, usually takes place every two years, but this was the first, in-person meeting to take place since 2018, when it was held in London. The theme for the 2022 meeting was: Delivering A Common Future: Connecting, Innovating, Transforming. CHOGM is an excellent opportunity to lobby the most senior decision-makers and politicians across the Commonwealth member states and, for CLGF, this means advancing key campaigns to prioritise sustainable urbanisation and to increase the number of women politicians in local government.

CLGF has been working in partnership with other Commonwealth organisations to advocate for the Commonwealth to put sustainable urbanisation onto its agenda; with many members having actively  participated in consultations and events which led to the development of the Call to Action. This formed the basis of the lobbying on Sustainable Urbanisation to the Commonwealth heads of government.

The second day was used to brief key delegations attending from across the Commonwealth and to emphasise the potential of leveraging key Commonwealth organisations, including CLGF and its Commonwealth Sustainable Cities Network, to support member states in implementation.

In a final push, Mayor Bernard Wagner, Belize City, Board Member of CLGF and Chair of the Commonwealth Sustainable Cities Network, and Astrid Haas, an economist who has worked closely on the Call to Action, had the opportunity to address a session of the Business Forum at CHOGM, emphasising the importance of partnership with the private sector in ensuring liveable cities and communities for all.

The full Communique can be found in full here, but the relevant recommendations have been extracted and are given below:

57. Heads expressed their appreciation for the leading role women and young people play in galvanising support for climate action across the Commonwealth and committed to ensuring gender responsive implementation. Heads noted the Commonwealth Youth Statement on Climate Change with its call to support communities and safeguard the most vulnerable, including youth, women, the elderly, and persons with disabilities. This should be done by ensuring predictable finance to the local level to enable greater locally-led action. Sustainable urbanisation: smart and resilient sustainable cities and communities

105. Heads noted that the Commonwealth is home to one third of the world's population and nearly 50 percent of the projected increase of the world's urban population by mid-century. They reiterated their commitment under SDG 11 (sustainable cities and communities) to make cities and human settlements inclusive, safe, and resilient. To this end, Heads adopted the Declaration on Sustainable Urbanisation.

106. Heads underscored the intrinsic value of sustainable urbanisation to harness structural transformation for the world's urban populations, particularly those in Commonwealth countries. Heads noted that while the COVID-19 pandemic reversed some gains made in urban development and exposed systemic inequalities creating new vulnerabilities, it also created new opportunities to address social inclusion, and brought to the fore the centrality and importance of the right to an adequate standard of living, including housing. As such, Heads committed to prioritising the provision of affordable and social housing to mitigate the proliferation of informal settlements, promote social inclusion and cushion the urban poor from social-cultural and economic shocks.

In addition to the Communique, a stand-alone Declaration on Sustainable urbanisation was also adopted.

CLGF Secretary-General Lucy Slack said: "With the support of our valued members and colleagues, CHOGM was successful in highlighting the issue of rapid urbanisation and sustainable development. I am hopeful that this will herald closer collaboration with the Commonwealth Secretariat, other Commonwealth partners, and members states on the implementation of actions to address this crucial issue."

All the information relating to CHOGM 2022 can be found on the official website, including the final communique.