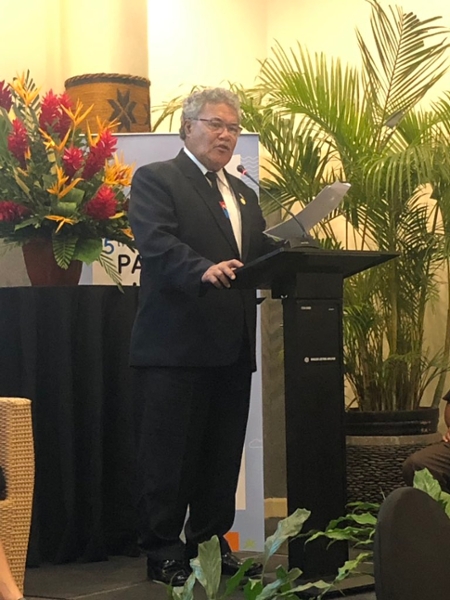 After three successful days of discussions, the Fifth Pacific Urban Forum drew to a close with some final remarks from CLGF Patron and Prime Minister of Tuvalu, Hon Enele Sopoaga. Conclusions of the forum are detailed in the Outcomes Statement.

The Forum, which had been hosted by the Government of Fiji and supported and co-organised by CLGF together with UN-Habitat, Monash University, Pacific Islands Forum Secretariat, UN Economic and Social Commission for Asia and the Pacific and Compass Housing Services, concluded with a call for action and the deployment of all resources and efforts available to implement the New Urban Agenda for the Pacific. An action plan was produced with commitments relating to the four pillars of PUF5:

PUF5 also provided contributions and inputs to global and regional platforms for sustainable urbanisation and a roadmap towards upcoming stakeholder meetings such as the Pacific Island Forum Leaders' Meeting in August; the Seventh Asia-Pacific Urban Forum (APUF7); the Tenth World Urban Forum (WUF10) and the UN ESCAP Commission in May in Thailand.

In addition, two important partnerships resulted from the meeting:

As well as supporting the successful political anchoring of the the Pacific New Urban Agenda, Hon Enele Sopoaga re-emphasised many of the points that had been stressed throughout the conference. These included how important sustainability of Pacific cities is to future developments within the region, and how the Island nations’ unique vulnerabilities also present them with opportunities which can be harnessed through the Pacific New Urban Agenda.

The Prime Minister expressed awareness that there are no short-term fixes to the urban demands of the Pacific and, in order to plan effectively for the future, a number of important factors are necessary; such as the provision of good data, strength of political will to tackle urban issues and a willingness to accept that collaboration and partnerships are vital for success.

Most disadvantaged in society: most vulnerable to urbanisation

Mr Sopoaga reiterated Prime Minister Bainimarama's earlier comments at the conference, that those most disadvantaged within the Pacific societies are also those who are most vulnerable to the impacts of urbanisation and climate change. He expressed support for Mr Bainimarama’s view that effective responses to address such vulnerabilities must be "inclusive, and locally focused, driven, owned, and implemented”. He stressed the need to seek urgent global actions on climate change – especially GHG emissions reduction - as well as accessible adaptation funding based on the 'polluter-pays' principle to ensure the Pacific people’s livelihood and survival. He passionately expressed how the region could not continue to suffer the impact of climate change while more industrialised nations continue to burn fossil fuels.

Sopoaga told delegates that he was aware that implementation in the region is challenging due to size and under-resourcing of many local governments and institutions in Pacific nations. He pointed out, however, that such bodies are crucial in bringing communities together. He praised the Tuvalu Government for its prioritisation of the Outer Islands and Rural Development, as well as the support CLGF has offered the island through its Local Programmes.

The Prime Minister concluded by emphasising the importance of local government in both representing the Pacific peoples’ views, as well as fostering partnerships and implementing development for a “resilient and sustainable future”. His remarks were later reflected in the Declaration produced by the Forum participants, created to clarify Pacific stakeholders’ commitments to sustainable development and the Pacific Urban Agenda.

More information can be found on the UN Habitat website including the full programme. and the detailed program please visit: