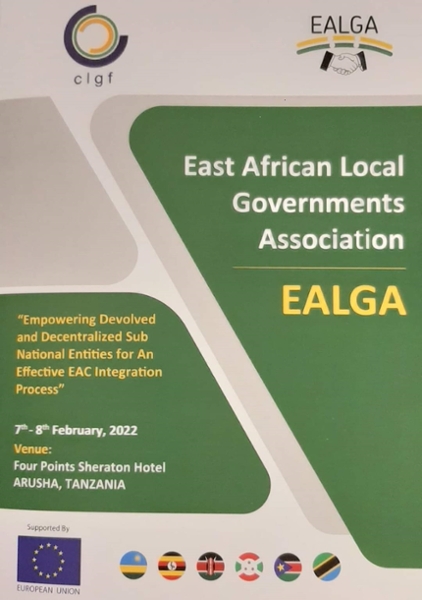 With COVID-19 creating so many challenges to local government, not least the restriction of movement and need for isolation, CLGF is delighted to be holding its first in-person meeting with members since the start of the pandemic.

Working In partnership, CLGF, the EALGA and the EALGF are holding a two-day conference entitled: Leveraging the role of local and county governments to fast-track achievement of the EAC integration agenda in Arusha, Tanzania on 7 and 8 February.

This is the seventh meeting of the EALGF and will focus on devolution in the EAC and the role and potential of local government to support regional integration and the implementation of EAC treaty commitments.

It will provide an important opportunity to discuss how best to:

All of this will be done in the context of the COVID19 pandemic and COVID recovery.

​This meeting will also highlight some of the achievements and outcomes of the project, including support for:

CLGF Secretary-General, Ms Lucy Slack said: "Whether it be our advocacy, networks, programmes or research assets, CLGF's work has continued and thrived throughout the pandemic, and I would like to thank our members, donors and staff for rising to the enormous challenges. It is very exciting to have the opportunity to hold a face to face event with our colleagues in East Africa and I look forward to a very productive meeting."

The East Africa Local Government Forum (EALGF) was officially launched in 2012 in Arusha, Tanzania by the ministers of local government of the five countries of the EAC, EALGA and its five member associations, in partnership with CLGF, UCLG, EU, and UNDP. The aim to establish a regional forum that brings together actors from local government across East Africa to add benefit to addressing the key challenges facing the sector, and build a stronger relationship between local government and the EAC.

The EALGF is not an institution but rather a network of key players and stakeholders from both local and central government, involved in promoting effective decentralisation, empowering local government to deliver development at the local level, and engaging with the EAC and other formal regional structures. The Forum is chaired by Hon. Ministers of Local Governments on an annual rotational basis and co-chaired by the Chairperson of the East African Local Government Association (EALGA).

The East African Local Governments Association (EALGA) is the umbrella association for the national local government associations in East Africa that include Uganda, Kenya, Tanzania, Rwanda and Burundi. The Association was inaugurated in 2002 and effectively started operations in 2005. It has its headquarters in Arusha – Tanzania.

EALGA was established to contribute to the strategic dynamics of local governments in East Africa in pursuit of democracy and good governance, peaceful co-existence, equitable distribution and sustainable utilisation of resources; and provide political space for local authorities’ participation in regional development by ensuring that regional integration and cooperation and laid down under the East African Community (EAC), is people driven. EALGA currently has an observer status within the EAC.