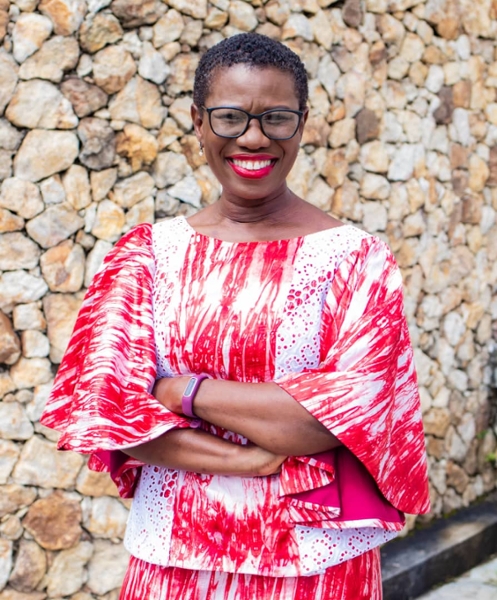 The overwhelming message emerging from a special session at COP26 on local government and climate change is that it is impossible to separate people from climate action.

A very thought-provoking and human perspective was given in the keynote speech, which was delivered by Yvonne Aki-Sawyerr, Mayor of Freetown, Sierra Leone and CLGF member. Mayor Aki-Sawyerr is at the heart of dealing with the many challenges of modern life facing the West African capital, which include rapid urbanisation as well as the impact of changing weather conditions and informal settlements.

Mayor Aki-Sawyerr began by explaining how, in a very short space of time, Freetown's population had grown from 500,000 to 1.5 million. This growth has its roots in the civil war, which ended in 2001, and the Ebola outbreak, but was inevitably influenced by climate change. As a country, largely dependent on agriculture as an industry, there is little resilience to extreme weather. Too much rain, or too little - they can both cause harvests to fail and drive people to move and seek alternative employment in cities. She cited problems of land access as a major barrier. The function of land tenure is still held by central government, but expecting a ministry, with its offices based in the capital, to plan for land-use planning is very unrealistic. The lack of development control has resulted in a rapid growth of informal settlements. However, fleeing vulnerability invariably makes people more vulnerable.

Informal settlements spring up on mountain ranges, where the danger from landslides can result in multiple deaths, in minutes. As water runs away, instead of into storage, water shortages occur. Poor access to water and sanitation result in health challenges. Housing made from materials comprising zinc is already hot, but suffers further because of lack of tree cover due to deforestation, and this will also cost lives.

The Mayor very powerfully illustrated the importance of talking about climate change, not just in terms of the changes in the weather but, in relation to the impact on the most fundamental aspects of our daily lives. The other challenge of informality is that poverty breeds poverty: when you are living with no road network, you cannot access work and your children cannot access education. There is a burgeoning number of community schools being set up by parents; but the same overheated zinc structures and unqualified teachers perpetuate the cycle of poverty.

Mayor Aki-Sawyerr explained that Freetown is addressing these issues through dialogue and conversation: treating sanitation as a priority in the hard-to-reach communities; recognising that informality is not just about informal settlements, but also low incomes, lack of road infrastructure and connectivity. Freetown has created 2000 jobs for waste collectors, targeting both men and women, to factor in the importance of gender equality. In less than four years, since Mayor Aki-Sawyerr's election, waste collection figures have increased from 21% to 49%, with the ultimate goal of 60%. Most waste in informal settlements is organic, as plastic and cardboard packaging are not a common feature of everyday life in slum dwellings, which means it is ideal for composting. Going on to use the waste as fertiliser is proving very successful. But she cautioned, however, that these are short-term measures and do not provide the answer.

Ms Aki-Sawyerr said that the goal is not to do away with informality, but to work with it; not to take people out of slums, but to take slums away from the people. Upgrading areas and moving with communities to improve neighbourhood rural access, lighting, sanitation. It was vital to understand the people, where they come from, how long they had lived informally. To create new communities, it is vital to work in partnership and ask the people how they want these new communities to look. The communities have to be engaged in the design of homes, and with a new, collaborative and interactive approach to financing.

Informal settlements on the coastline also present a problem. Created on top of a solid platform of garbage - the easiest way to reclaim land - this will, in turn, destroy the mangroves, which are vital to the much needed biodiversity. The Mayor called it a tragedy that people running from climate vulnerability, ended up creating more damage. The health risks of informal settlements, such as malaria, are a key danger, directly linked to poor sanitation, extreme heat and lack of access. Many pregnant women who cannot reach health facilities die in child birth.

In Freetown, work on accessibility is taking place with the building of a cable car to link mountain communities to the centre. To prevent landslides, 550,000 trees have been planted at a cost of two million dollars. Trees are being grown, as well as planted and young people are being brought into the project as stewards, receiving payment to monitor and grow, which is contributing to general sustainability.

She concluded that there was an urgent need to control and organise land access and prevent informality from increasing. Other priorities are true devolution and the ability to work with residents and make them part of the solution. Adaptation requires finance and, while climate change is fast moving, accessing funding to find solutions is too slow.

A range of different perspectives were provided in the subsequent panel discussions and are described in the second article on our website. Undoubtedly, it is in our homes and daily lives where the impact of climate change can be felt the most significantly. It is right that solutions are discussed, decided and delivered in our communities, with the voice of local government being heard loud and clear.

Read more about the whole event or listen to the conversation in full.

Find out more about the work that Mayor Aki-Sawyerr is doing to transform Freetown!