Cleaning up in Dominica 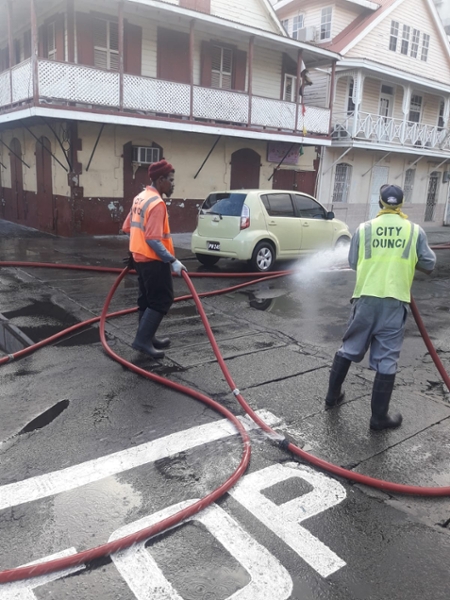 Roseau City Council, the largest municipal body on the Caribbean island of Dominica, has been putting its efforts into a robust public health campaign.

The campaign is largely centred of the sanitisation of the physical environment: the streets, pavements and drains within the city, but it also yields important secondary benefits.

With the spread of COVID-19, it is widely recognised that hygiene and sanitation are regarded as major components in the containment of the virus and preventing it from spreading. The focus of the council is, therefore, on washing down public areas, including streets, pavements and drains. The reason for this enormous effort by local government is not simply related to hygiene, it is about gaining pubic confidence and assuring citizens that public spaces are propery sanitised, lessening the fear of the public in getting around.

Key to this work has been having the proper equipment and Roseau's City Clerk has graciously thanked CLGF for enabling the power wash equipment, and even the wheelbarrows and shovels, to be purchased as part of a related project. The funding came from the European Union and was part of a wider project across the Commonwealth to localise the Sustainable Development Goals (SDGs).

Aligned to the aims of local government everywhere - to be a seamless part of the community and work with the people to make decisions about how services are planned and managed - Roseau's sanitation work is demonstrating local government's commitment to the wellbeing of the citizens, both in tangible and intangible terms.