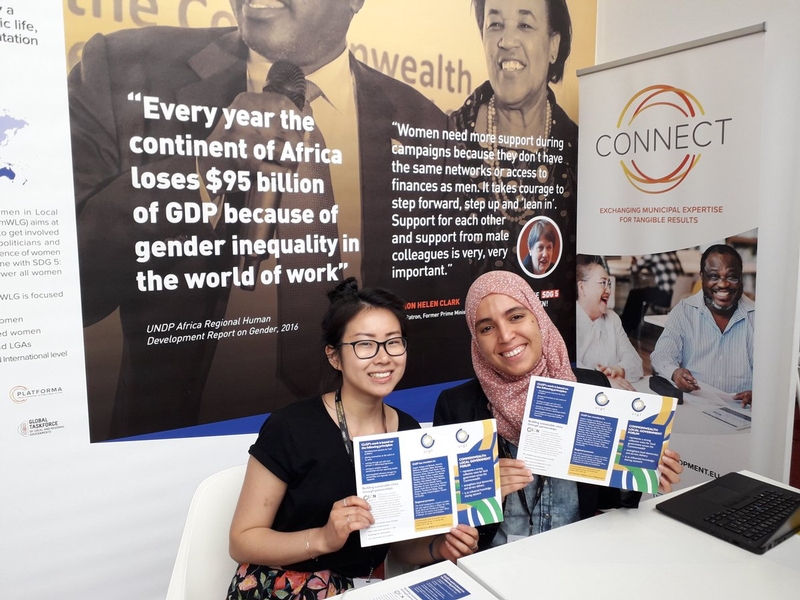 Since 2006, the European Commission has been organising the European Development Days (EDD) each year in Brussels, bringing together key actors and expert speakers to share ideas and debate the hot topics of the development world.

Importance of local government to development
This year was no exception and CLGF was delighted to join Platforma at the City Hall Stand to emphasise the important role of local government in achieving the Sustainable Development Goals. As well as a Framework Partnership Agreement (FPA) in its own right with projects in Dominica, Ghana, Jamaica, Malawi, Rwanda and Trinidad and Tobago, CLGF has a second FPA as a partner in Platforma’s Strategic Grant. Aligning perfectly with CLGF’s work was this year’s EDD theme: Women and Girls at the forefront of sustainable development: Protect, empower, invest. This provided an opportunity for everyone at the EDDs whether they were speaking, exhibiting or visiting to shine the spotlight on gender equity in all development activities, with a clear focus on SDG 5 – empowering women and girls.

One particular session entitled - Cities for girls and young women: cities for all - gave much food for thought. Looking at building cities that were inclusive and planned in a gender-responsive manner, it began by explaining that women were often side-lined and had no voice because they were excluded from many public areas. Public toilets that are often taken for granted in many countries can be dangerous places for women in some cities; while other countries experience wide-spread harassment on public transport. Many public spaces are simply no-go areas.

Solutions are being offered in the form of publicising local shops and stalls that young women can go to if they feel threatened; branding rickshaws and other vehicles that are deemed safe; bus drivers are being trained in what to do if a female is being harassed; and local politicians are walking with young women through the difficult areas to experience for themselves what is happening and look at what simple but effective actions can be taken – extra lighting, removing walls that create closed off alleyways etc. The panel discussing this topic included Frederic Vallier from the Council of European Municipalities and Regions; UN-Habitat Executive Director Maimunah Mohd Sharif; Anne-Birgitte Albrectsen, CEO, Plan International; Celestine Ketcha Courtes, President of REFELA; and Lais Rocha Leao, EDD Young Leader, Brazil.

One simple suggestion from the floor was that we look at the barriers preventing women from standing for public office, help them to overcome these and support them when they are in office to become effective leaders. By increasing the number of women involved in decision-making, our cities would automatically have the input to make them more inclusive for women. This is very much in line with CLGF's plans to work with country chapters to progress the aims of the Commonwealth Women in Local Government Network and support women in public life.

The panel finished by agreeing that men needed to be better educated about the importance of women having free access in their cities, including for economic purposes, with gender mainstreaming in schools. Another point that was reiterated was to open the dialogue and keep listening to young women and their experiences.

The EDDs2018 gave great impetus and energy to development activities by showcasing so many excellent projects.

With one third of the winners coming from the Commonwealth, CLGF is delighted at today's announcement by Bloomberg Philanthropies of the 15 successful cities of the Global Mayors City C ...

Together we are stronger!

Wishing you, our members and partners, a very happy New Year.