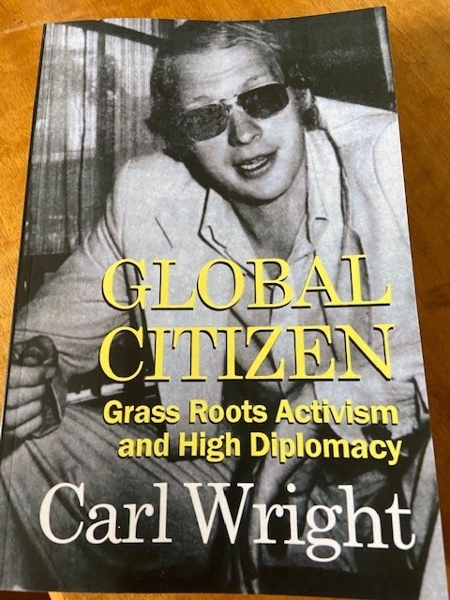 Delighted to commend some reading material, especially when it relates so closely to CLGF, our work and the causes in which we so passionately believe.

CLGF hosted the launch of a book by Dr Carl Wright, founder and former Secretary-General of CLGF, at Marlborough House, London on 1 July. The book entitled - Global citizen: grass roots activitsm and high diplomacy - includes a foreword by former New Zealand PM Helen Clark who has been a patron and strong supporter of our work for a number of years. Also participating was Owen Tudor, International Trade Union Confederation - ITUC, and many colleagues and friends spanning Carl's varied career, with the whole event presided over by Ms Lucy Slack, currently CLGF Secretary-General and close work colleague for over two decades.

The book gives Carl's professional and personal recollections over 50 years' working in international positions at a senior level, including the United Nations, Commonwealth and European Union. It makes a plea to oppose narrow nationalism and xenophobia and to safeguard our fragile global institutions and also recounts Carl's encounters with many iconic global leaders like Nelson Mandela, India Gandhi and Fidel Castro.

Carl's former boss, Guyanese politician and second Commonwealth Secretary-General, Sir Shridath Ramphal, said: "These recollections are a textbook for a generation still in need of learning the compulsions of global citizenship".

Ms Slack said: "It was a very enjoyable event, supporting Carl's book launch, but also a great reminder of the significance of celebrating the rich, complex and important sphere of governance that is local government."