A point of view from CLGF Patron Helen Clark 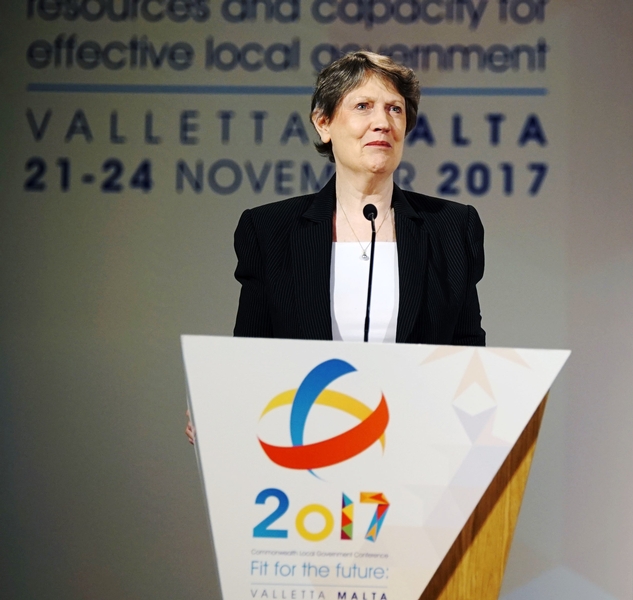 Helen Clark was Prime Minister of New Zealand for three successive terms from 1999-2008 and the first woman to lead a party to electoral victory in New Zealand. In 2009, she became Administrator of the United Nations Development Programme (UNDP), the first woman to lead the organisation, serving two terms in the role, and led UNDP to be ranked the most transparent global development organisation. She also chaired the United Nations Development Group, a committee consisting of all UN funds, programmes, agencies and departments working on development issues.
Helen continues to be a strong voice for many issues including sustainable development, climate action, wildlife conservation, gender equality and women's leadership, peace and justice, and for action on non-communicable diseases, HIV, and drug policy.

It gives me great pleasure as CLGF Patron to mark International Women’s Day 2019 with a few words.

Firstly, I want to pay tribute to all the talented women in decision-making roles across the Commonwealth; whatever sphere of government or role you play, you are making a real difference to everyday lives.

Gender equality is the smart thing to do! You can have both a career and family. The Prime Minister of my own country, Jacinda Ardern, a woman under 40 and with a young baby, is powerfully demonstrating that gender is no barrier to providing effective and inclusive leadership. But we need more women to feel able to take part in public life. If more issues of importance to women are to rise to the top of political, legislative, and budget priorities, more women must sit at the top tables. As women, we must be drivers of development, not just passive beneficiaries of plans designed by others.

The issues that directly affect women – safer environments, better access to education and employment, child care support, and protection against violence in and outside the home will all be more effectively addressed with input by women. To me, empowering women to play a bigger role in public life is simply a no brainer.

Public life means national and local government, but also civil society, preferably working in harmony. When women are involved in the debate, the whole tone changes. A critical mass of women brings about new and different insights. Gender quotas are a great way of achieving this. It is women who recognise the importance of safe water and sanitation and other basic services, because they are in many cases the ones who have to fetch the water and have the greater need. If we push for better representation of women on all levels, we may not change everything but we will get the momentum moving.

Having women in leadership positions not only sends a powerful message to other women but also changes societies' perceptions of gender roles and encourages girls to believe that no door is closed to them. If you can’t see it, you won’t be it!

I also recognise the important support male colleagues can provide for gender equality. When the women of New Zealand won the right to vote 126 years ago, it was an all-male parliament who voted for that.

Some stark facts: three quarters of the world’s unpaid work is done by women; the continent of Africa loses around $95 billion dollars in GDP each year because of gender inequality in the labour force; and, based on current practices, it is estimated by the World Economic Forum that it will take 100 years before overall gender parity is achieved. Yet, as Hilary Clinton said, gender equality is not just the right thing to do, it’s the smart thing to do. The full inclusion of women in economies lifts GDP immensely and in decision-making makes for better decisions.

On a positive note, women’s voices are being heard more and more. I welcome the founding of CLGF’s Commonwealth Women in Local Government Network (ComWLG). I look forward to discussing issues around gender equality at the Commonwealth Local Government Conference 2019 in Colombo, Sri Lanka this August. The theme: Citizen-centred local government: driving inclusive social and economic change provides an ideal forum at which to look at ways for making decision-making more gender balanced.
I began by acknowledging the many strong women in public life across the Commonwealth. I conclude by wishing you all success in going further in your work and building better communities for everyone.