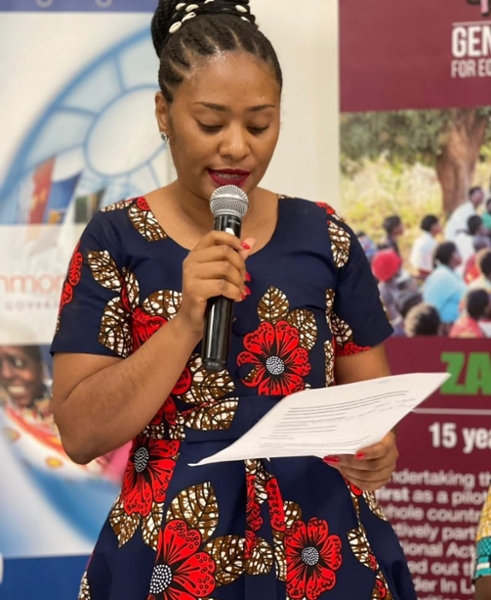 “We are far more united, and have far more in common than that which divides us”- Jo Cox

The closing of CLGF’s pioneering Connecting the Dots project continued this September, this time with the Jo Cox Summit in Zambia. Similar to the projects in the other three participating countries, CLGF in Zambia worked with Gender Links, the Ministry of Local Government and the Local Government Association to host a summit, in this case, a week-long event in September.

Representatives of the various networks involved in the two-year project joined to share their reflections on their challenges and the many lessons learnt, and to celebrate the successes throughout the duration of the project.

A key success of the project in Zambia is the election of Ms Tapera Joy Mbewe, the youngest newly sworn in councillor at the age of 20 years old. Cllr Mbewe said: “I am thankful to the Jo Cox Project as it has provided not only leadership training but also support and mentoring from experienced councilors, who have become like mothers and sisters”.

Representation of women in government

To ensure the sustainability of this work, this strategy will be used to continue supporting women’s participation in decision making in local government.

Ms Rashida Mulenga, the chairperson of the Women in Local Government, shared the results of the 2021 General Elections, and said: “At the national level, we have seen: the first woman to be the speaker of the national assembly. At local government level, we have maintained 8% women elected as mayors, council chairpersons and councillors. The results illustrate some progress in women political representation. But we are far from achieving equal representation”.

Cllr Mylenga called for: lobbying for 50% quota for women in government, implementation of existing policies, advocacy for increased women participation in party structures, profiling of women political leaders in the media and the continued mentorship and training of women leaders.

Ms Nyasha, Simbanegavi, Southern Africa Regional Programme Manager closed the session and said: “I would like to warmly congratulate each of the networks for all their hard work during the course of the project, particularly given the challenges posed by the COVID-19 pandemic. It is beautiful to see the young women and the older women coming together in an intergenerational dialogue to support each other.”

She continued: “Although the project has come to an end, CLGF has just started with our work to support women. We will continue with our work through online engagements of the networks in-country, and also at the regional level to ensure continued mentorship and sharing of lessons. The WLG network will also form part of the Commonwealth Women in Government Network to ensure continued knowledge sharing and mentorship. We are currently working hard to engage development partners for resources to continue with the empowerment of women leaders”.

For the past two years, CLGF, Gender Links and a host of partners from local and national government have been working hard to implement this project across four countries of Southern Africa: Eswatini, Lesotho, Zambia and Zimbabwe. Connecting the Dots sets out to empower women by helping to increase the number of women politicians and senior practitioners in local governments across the region; and to support women entrepreneurs. Funded by the Jo Cox Foundation and UK Aid, the project honours the legacy of Jo Cox, a UK MP who was a passionate campaigner, activist, internationalist and humanitarian, but whose life was cut short. With funding from UKAID and the Jo Cox Foundation, project successfully worked to politically, professionally and economically empower women and girls in Southern Africa by strengthening in-country networks through training, mentoring and networking.