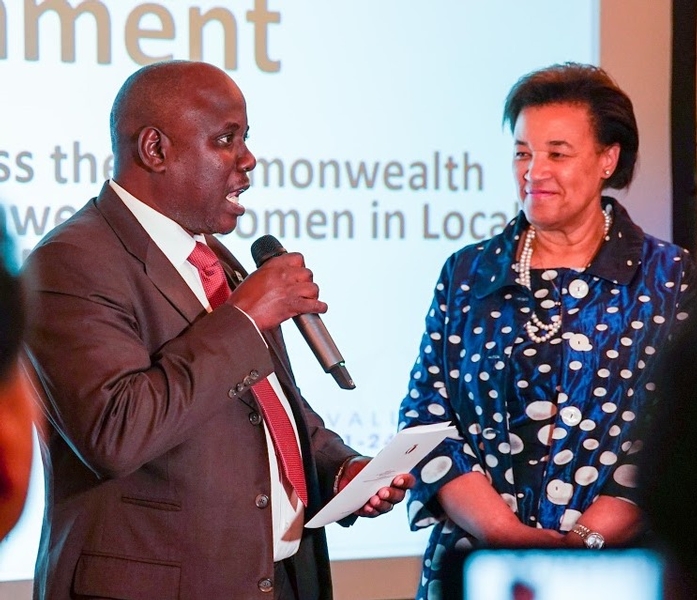 At its flagship conference last week in Malta, CLGF launched a new network for Commonwealth Women in local Govenrment. With the aim of supporting more women to get involved in local government as politicians and practitioners, and to increase the influence of women in the decisions made about local priorities, male and female delegates gathered at the beautiful Verdala Palace, the summer residence of the President of Malta, for a reception.

Presided over by CLGF's Chairperson - Cllr Rev Mpho, the first speaker by video was our host, HE Marie-Louise Coleiro Preca, President of Malta. After welcoming people, she said that it was not only essential to emphasise the importance of women's participation, but to take action and ensure women are effectively engaged across all positions of leadership. She urged us to challenge the status quo; to be bold and take practical and timely measures to reform systems that maintain the marginalisation of women and girls. Gender parity is not just about moral necessity, but economic wellbeing. A recent Gallup study of 800 business from the retail and hospitality sectors noted that gender diverse businesses fared better financially. We can only achieve gender equality through deep-rooted reform of social, economic and political institutions so they reflect the depth of our aspirations for equality, equity and inclusion. Wishing the network well, she urged women to come together to ensure women's voices are heard.  Click here to see more.

Commonwealth Secretary General Rt Hon Patricia Scotland congratulated CLGF on the launch - particularly at a time when there was a female President of Malta, female Patron of CLGF, and female Secretary-General of the Commonwealth. She declared herself to also be a local councillor in her role as Alderman of Bishopsgate in London. In a period of more than 1000 years, she explained that she is only the fourth woman to hold the position - and the first black woman. This was met by spontaneous applause from the audience. The Secretary-General also acknowledged her father as the greatest feminist she knows, providing a role model for all her siblings. She welcomed the Network and looked forward to future achievements. Click here to see more.

Rt Hon Helen Clark told the audience to look no further than New Zealand for gender equality, with the country passing a law to allow women to vote as far back as 1893, and recently welcoming the third female prime minister. But it takes courage to step up and a local gender gap report paints a bleak picture, showing that we are actually going backwards in gender equality. Women need more support during campaigns because they don't have the same networks or access to finances as men, and we need to look at the structures; for example, to issues around the timing of meetings and activities. We also need to have the support of our male counterparts. Click here to see more.

Cllr Rev Mpho closed this part of the event with a jubiliant toast to the Network and its future success. More information about the network will be provided in the coming months.

Leaving no-one behind in democracy

Inclusive politics in the Commonwealth

Marking the end of the two year CP4D project to strengthen democracy across the Commonwealth, representatives of a number of countries came together for a three day conference in London from 4-6 March.