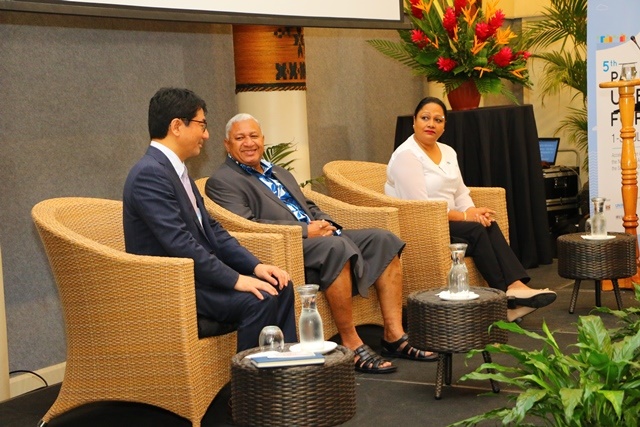 At the beginning of July, the Fijian city of Nadi played host to more than 200 participants from over 25 countries for the Fifth Pacific Urban Forum (PUF).

Organised by CLGF, in partnership with the UN Economic and Social Commission for Asia and the Pacific (ESCAP), Monash University, Pacific Islands Forum Secretariat and Compass Housing Services, the aim of the PUF is to provide an accessible platform for urban stakeholders to debate and discuss a sustainable urban future for the region. The first Forum was held in 2003 and gave rise to the Pacific Urban Agenda which was later endorsed by both the United Nations ESCAP Commission and the Pacific Island Forum Leaders.

Participants of PUF5 included a broad range of national and local governments, NGOs and community organisations, traditional leaders, relevant development partners and the media, with high level representatives from 13 Pacific islands countries in attendance. Opening remarks on behalf of the hosts were delivered by Hon Premila Kumar, Minister of Industry, Trade, Tourism; Local Government; and Housing and Community Development. The Secretary-General of the Pacific Islands Forum Secretariat Dame Meg Taylor highlighted the need for a regional approach to urbanisation, describing it as a powerful force for sustainable development in Pacific countries. She called for a greater focus on urban land as a key to a sustainable future within the Pacific and cited the region's shortage of planners, designers, engineers and local government staff to implement the New Urban Agenda.

On a similar note, Cherol Ala, Director General of Vanuatu requested a renewed focus on sustainability and climate change awareness, announce the creation of a new department for Urban Development and Planning while stressing the importance of people from the region being able to create and live in an environment they respect.

The first day provided opportunities for stakeholders to interact through a series of events and special session on issues ranging from national urban policies to human rights. Ministers from a range of Pacific Island nations including Papua New Guinea, Fiji, Kiribati and Vanuatu were able to discuss some of the challenges and tools they had encountered in their respective countries relating to the implementation of the New Urban Agenda, such as lack of finance and capacity and the importance of urban rural linkages.

On the second day of the Forum, the Prime Minister of the Republic of Fiji, Hon Josaia Voreqe Bainimarama stressed in his keynote speech the need for more sustainable urban development to tackle inequality and climate vulnerability. He told the audience that the impact of future actions, boldness of decisions and strength of cooperation of the Pacific Urban Forum and beyond will determine whether those urban centres emerge as engines of sustainable development, or bastions of inequity and climate vulnerability.

PM Bainimarama spoke about the importance of building for the future and stressed the need to prepare towns and cities for future influxes of families who may be forced to move to urban centres due to changing climactic conditions. The Prime Minister told delegates that the Pacific island countries have a responsibility to inspire action by being shining examples - to the rest of the world - of sustainable urban development.

As well as recognising the role of urbanisation in achieving sustainable development, discussions highlighted the role of long-term national planning for urbanisation through national sustainable development plans and urban policies. The Forum reviewed the Pacific New Urban Agenda in light of the SDGs, and discussed how to anchor the Pacific New Urban Agenda within the region’s institutional and political architecture. Participants also considered how the region’s land tenure and informal settlements affect urbanisation, and called for policies to develop healthy, safe, liveable cities.

The third day of the conference saw a session on the City Partnerships Challenge and how it supports cities to localise the SDGs. Speakers included the Global Advisors Mia Davison and Dr Jane Stanley. Later that day, in a session on Pacific Partnerships, Governor Parkop described urban challenges and their solution within the context of Port Moresby. The Governor went on to reiterate the importance of acknowledging urban realities at a national level.

The three day meeting was a combination of plenary sessions and special groups looking at the themes of Governance and Data; Urban Resilience and Climate Change; Informal Settlements, Land and Planning; and Urban Economic Development; complimented by a number of side events and field visits to two settlements.

Read about the outcomes in the next PUF news article on the website.

The full programme of the event can be found here and, for more information on the PUF5, go to the UnHabitat website.