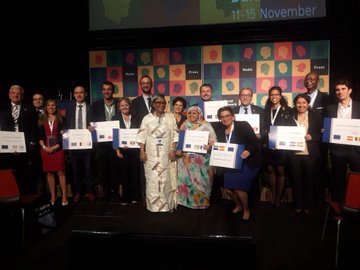 Durban became the focus for all things local this November, when it hosted the World Assembly of Local and Regional Governments' Summit.

There was good representation by CLGF with Chairperson, Rev Cllr Mpho Moraguawka, Secretary-General Dr Greg Munro, Deputy Secretary-General Ms Lucy Slack and other CLGF members joining more than 3000 local government stakeholders from around the world. What followed was a mix of formal interactions with an opportunity for informal networking, a flavour of which is given below.

The Mayor of the host council, eThekwini, shared the city’s pro-poor strategy, a key element of which is how LED (local economic development) is being underpinned by massive land releases and investing in bursaries for young people to develop skills and to work on the big ideas. Cllr Rev Mpho Moruakgomo expressed CLGF’s view that the coming decade is one of implementation: a decade on which local government needs to firmly focus and the Global Taskforce needs to evolve in order to enhance these efforts.

The second day of the World Summit was dominated by the UCLG Learning Forum, linked to their Learning Strategy 2019-2021, which aims to boost the reach of UCLG policies through learning and specific recommendations on innovative learning methodologies and mechanisms.

Day three focused on transparency, resilience and migration; with local leaders stressing the added value that cities can bring to the planet’s resilience and the natural and cultural heritage affected by our way of living. Delegates considered how to present this debate in the UN agenda and achieve a wider understanding of resilience that focuses on the role of cities managing the natural resources and contributing to resilience. The transparency session presented new governance models that put transparency and access to public information at the core.

The final day started with the Plant Tree Not Bombs campaign launch, a symbolic ceremony to demonstrate the importance of local policies for peace to local government.

Chairing a panel of eminent local government leaders, Dr Munro explored how to build policy from the community-level up, with practical examples from the Mayor of Banjul on using local community networks to effect bottom-up policy planning. There was broad agreement that the challenges will not be achieved by any one stakeholder alone and alliances will be key, as envisioned in the New Urban Agenda, to achieve the transformations that are needed. A representative from Barcelona said that we need to make commitments to multi-level governance a reality and action at the local level is central to that.

Dr Munro commented: “There were some really useful sessions at the Summit, but just as important was the opportunity to hold bi-lateral meetings and to meet with many CLGF members. For example, it was very exciting to hear from the Federation of Canadian Municipalities about the programme work they have planned on gender equality.”

Gender equality was high on the agenda and, while facilitating an event on women’s empowerment, Lucy Slack talked about the work of CLGF’s Commonwealth Women in Local Government Network (ComWLG), which works with national associations to set up in-country chapters to support women at all stages of their political careers in local government. With the 25th anniversary of the Beijing Declaration in 2020, the Gender Equality session defined the roadmap towards Beijing+25, with a visionary agenda for the empowerment of women and girls. This revolved around 12 critical areas relating to the strong role of cities, local and regional government in the effective implementation of gender equality at all levels; and addressed the need to have more women in political life and decision-making positions, at all levels. Ms Slack said she looked forward to working collectively to mainstream local government at Beijing+25.

Mainstreaming at the local level

With a clear consensus that local government has the power to mainstream gender across all areas and needs to be heard; CILG Executive Director, Neila Akrimi, stated that, although our governance system enables gender inequality, we can change this; while a representative of FCM added that it was quite clear that gender equality is the responsibility of everyone, particularly in terms of making advances at the local level.

Lucy Slack praised the conference for making it possible to meet up with donors face-to-face and emphasised the value that CLGF places on its partnership with the European Commission to strengthen local government’s role in policy and delivery towards achieving the Sustainable Development Goals.

Cities Alliance, led by William Cobbett, used the opportunity to hold a meeting of its Board. The members, including important local government bodies such as CLGF, ICLEI, Metropolis, UCLG and many others, looked at ways to better support each other more in their various work streams.

Report on progress towards SDGs

UCLG used the event to launch the new GOLD V report at a session on Transforming Cities. Representing an important piece of work for the local government community and involving the partnership efforts of many, the report provides an overview of the position of local government progress in achieving the Sustainable Development Goals.

Formal elections for the presidency of UCLG were held and Mohamed Boudra was elected to serve as the new President with the task of translating commitments into policy for localisation and delivery of the Agenda 2030. It is broken down into regional chapters which detail how decentralisation and multi-level governance are enabling (or not) local governments in contributing to the Agenda 2030.

For more information about the Summit and UCLG, go to the website, including reading about Durban Cities Declaration.

CLGF has just secured a second, significant raft of funding from the European Union in the form of Phase Two of the Strategic Grant Agreement (SGA).

Local economic development in Madhya Pradesh got off to a great start in 2020 with the Startup Investors Summit taking place on 8 January at the Jabalpur Smart City Incubation Centre.