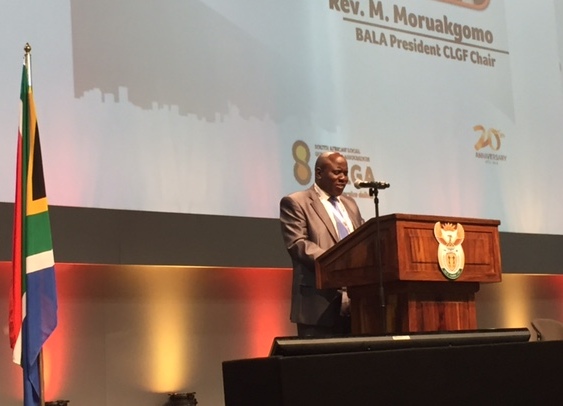 If the objective of leaving no one behind as envisaged by the Sustainable Development Goals  (SDGs) is to be achieved, local government must be empowered to effectively engage all people at the local level, according to CLGF Chairperson Cllr Rev Mpho Moruakgomo.

Speaking on the first day of the 2016 South African Local Government Association (SALGA) annual conference in Johannesburg , Rev Moruakgomo said that inclusion means paying attention to all voices including women, youth, the poor, the displaced, and local government is the sphere of government which is best placed to do this. Strengthening local democracy and governance is essential if the SDGs are going to be achieved.

He said that to achieve the transformative agendas such as Agenda 2030 and the SDGs, the Paris Agreement on Climate Change and other global agendas, there is a widely-recognised need to support and empower local and regional governments to play their part in implementation.

“For effective development to be realised, the collective needs of people have to be collectively and clearly defined locally,” said Rev Moruakgomo.

Congratulating SALGA on its 20th anniversary, Cllr Rev Moruakgomo said:
“I am honoured to address this National Conference particularly as SALGA and South Africa celebrate 20 years of local government.
“CLGF cherishes its long partnership with SALGA which has enabled other CLGF members to learn from the unique South African local government system and experiences.
“CLGF has also worked with SALGA to promote the exchange of experiences between South African municipalities and municipalities from India and the UK which has resulted in the implementation of successful projects and programmes to strengthen local democracy and local governance.”

CLGF's DFID funded project in Sri Lanka to promote Local Economic Development is making very pleasing progress. The end of January saw a real boost to the businesses of entrepreneurs in two ...

CLGF is always pleased to welcome a new member of staff to one of our regional offices throughout the Commonwealth.