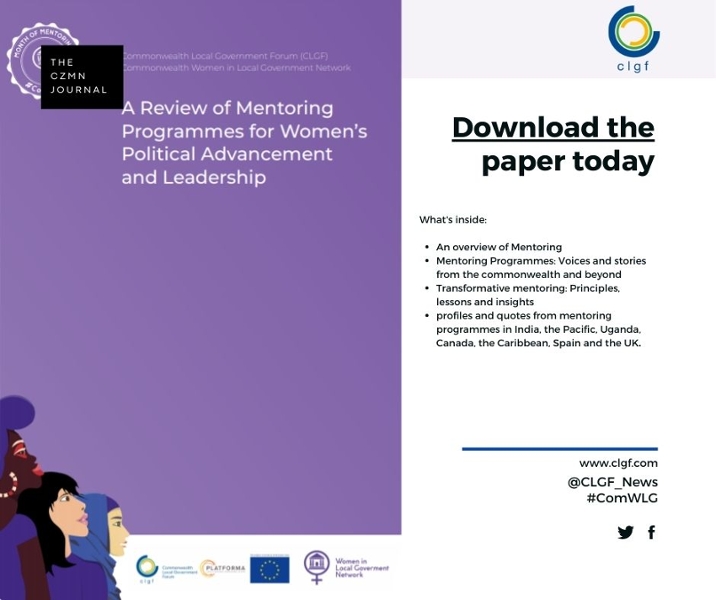 As part of the Month of Mentoring in August, CLGF is proud to publish the research paper we commissioned, entitled: A Review of Mentoring Programmes for Women’s Political Advancement and Leadership.

Written by Ms Myn Garcia, our technical expert and formerly of the Commonwealth Foundation, the report looks at the concept of mentoring in relation to supporting women to be effective in local government leadership, and the application of mentoring programmes in different countries. It considers the factors required to make a mentoring experience successful. The paper has been produced in cooperation with Platforma, the European network for development partners, and funded via the European Union.

Since the launch of the Commonwealth Women in Local Government Network (ComWLG) at our conference in 2017, interest in, and support for this support mechanism has been steadily increasing. As well as a strategic steer from this important network, several country-level women’s networks have been established across the Commonwealth, with the support of the national LGA. These forums include many knowledgeable women politicians, who are sharing their experiences of standing for election and, once elected, effectively serving in office; and many women who are keen to play a role in their communities.

The Vice Chairperson, Kenisha Gordon, talks about her own struggles to become a councillor in Jamaica, as both a woman and a young person. In Southern Africa, UK Aid – through the Jo Cox Memorial Fund – has been supporting the political and economic empowerment of women in Eswatini, Lesotho, Zambia and Zimbabwe – a joint project of CLGF and Gender Links. More information can be found about the recent dialogues, as the project comes to an end.

CLGF Programme Manager, Claire Frost said: “We are pleased by the level of participation in the Month of Mentoring, as many groups have held parallel sessions to explore how mentoring can help their own councils and communities. The campaign may have lasted for one month but, at CLGF, this is one tool that we will continue to promote for wider use in the months and years to come.”

CLGF Secretary-General said: “Women face many obstacles to launch a campaign to become a local government politician, let alone undertake a role in public life. Mentoring is a proven way of making this journey a little easier. I believe that mentoring will help us get closer to having gender parity in our local councils.”