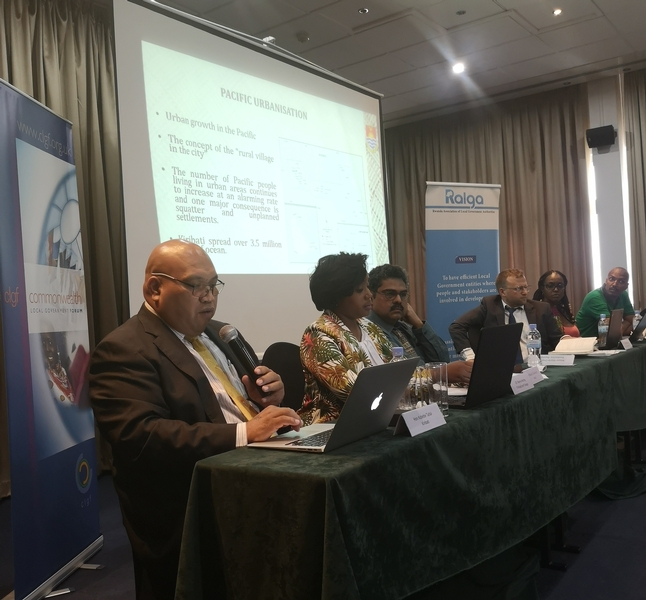 Around 50 international delegates from around the Commonwealth joined a number of local participants - including ministers, chairpersons of local government associations, mayors, academics and civil society organisations - to discuss important issues around creating cities that are safe, inclusive and prosperous.

The meeting was opened by Rwanda’s Minister for Local Government, Hon Francis Kaboneka, who is also a CLGF Board member, and the Mayor of Kigali, Marie Chantal Rwankazina, provided an introduction to the meeting, highlighting some of the successes and challenges for the city.

CSCN Chair, Mayor of Windhoek City Muesee Kazapua explained the objectives of the Network and the progress made since the launch in 2015, including the creation of a steering group to provide a strategic steer. He highlighted some innovations from Windhoek, noting that Windhoek used to be known as the cleanest city in Africa, but this accolade has now passed to Kigali.

Cllr Abena Hartley from Trinidad and Tobago shared some of the challenges presented by outdated legislation for Port of Spain in trying to promote economic development in the city. She spoke of the enthusiasm of the council in growing and developing the city, and the critical importance of visionary leadership and dialogue with citizens, especially young people, to ensure inclusive sustainable development.

CLGF Secretary Greg Munro and the Minister of Local Government exchanged views on cities and trade, and economic development. There was broad agreement that empowerment is key, and cities should be encouraged to be innovative and open.
Women’s economic empowerment was one of the main themes to the meeting and the event featured several elected women politicians, including Cllr Pearl Luthuli from eThekwini (Durban).

There is broad recognition across the Commonwealth that city governments have a central role to play in enabling economic growth through improved services and investment in infrastructure; but also in convening local stakeholders, civil society and private sector to deliver local economic development and ensuring no-one is left behind.

For the Rwandan hosts, the meeting provided an opportunity to share its work in strengthening secondary cities; learn from counterparts from across the Commonwealth; and contribute to the future direction of the Commonwealth Sustainable Cities Network to strengthen city to city cooperation and learning  in the Commonwealth.

The meeting was preceded the day before by a visit to both the Kigali Genocide Memorial at Gisozi and the Campaign Against Genocide Museum located at the Parliament of Rwanda, serving as a start reminder of the need to ensure cities and communities are open, fair and inclusive.

CLGF expressed sincere gratitude to RALGA and its Secretary General, Mr Ladislas Ngendahimana; and to Hon Francis Kaboneka Minister of Local Government and the Rwandan Ministry of Local Government (MINALOC) for their support in organising the meeting and making it such a success.