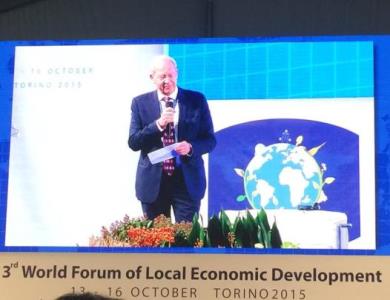 CLGF Secretary-General Carl Wright moderated a high level discussion on Cooperating to advance the new post-2015 development agenda: challenges and opportunities for local economic development (LED) at the 3rd World Forum on LED in Turin on 16 October which allowed him to highlight the key role local and regional government will play in not only LED but also in the implementation of the 2030 Agenda for Sustainable Development. UN Secretary-General Ban Ki-moon gave the keynote address at this session where he highlighted the key role of local government in implementing the Sustainable Development Goals (SDGs).

“So while we focus on global agreements, we have to realise that local environments are central to success. That is why it is so important for these global goals to be advanced in cities, regions and territories” he said. CLGF Board member Cllr Mpho Moruakgomo delivered the vote of thanks to the UN Secretary-General.

The session discussed ways in which cities, countries and organisations can ensure the implementation of the 2030 Agenda for Sustainable Development through localisation of the SDGs and how this would promote LED.

The World Forum on Local Economic Development took place in Turin. Italy on 15-18 October and looked at ways in which LED can be used as a tool to implement the 2030 Agenda for Sustainable Development.

The event was organised by the Municipality and Metropolitan City of Turin, the global network of United Cities and Local Governments (UCLG) and its Working Group on LED, through the Andalusian Municipalities Fund for International Solidarity (FAMSI), the Organization of United Regions (ORU FOGAR), the Brazilian Service of Support for Micro and Small Enterprises (SEBRAE), the International Labour Organization (ILO) and the United Nations Development Programme (UNDP).

Read CLGF Secretary-General's blog on The UN Agenda 2030: leave no one behind.