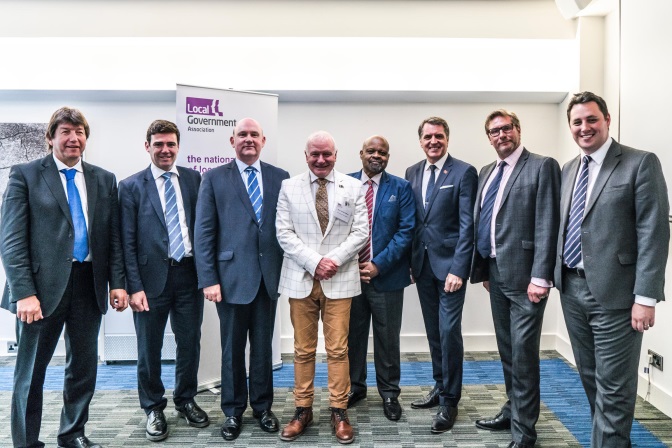 Calling on the organisation’s extensive experience of international networks, CLGF was invited to take part in a meeting for the six mayors, recently elected to preside over the newly created Combined Authorities in England and their chief executives.

Stimulating the local economy is a major priority for all six combined authorities which bring together local authorities, public services and the private sector. The two day meeting was organised by the LGA of England and Wales in London to facilitate a first discussion with senior civil servants and draw on international insights from Commonwealth mayors on the key local and regional levers of economic growth.

With CLGF’s LGA board member, Councillor Nick Small, chairing the session on trade and investment, CLGF Secretary General, Greg Munro, spoke about CLGF’s experience of building international network. He explained how mid-size cities are emerging as a key driver of global growth, citing Cape Town’s transformation from manufacturer to service provider with tourism, renewable energy, IT and communications as key drivers. He talked of Calgary, another example of a city that has continued to grow in spite of the recession, largely due to Mayor Nenshi’s efforts to bring a number of new international businesses to Calgary, as well as the importance he places on enhancing social policy and investing in infrastructure and education.

This was followed by presentations from Mayor Gordon Bradbery of Wollongong City Council in Australia detailing how he was able to capitalise on the proximity of his city to Sydney and the quality of life offer to reposition Wollongong into a new focal point for medium size enterprise. And, stepping in as a last minute replacement to the mayor of West Rand District, His Excelency Obed Mlaba South African High Commissioner to the UK, and former Mayor of Durban, described the partnerships that had been forged by Durban with the private sector under his administration to support local entrepreneurs.

The Combined Authority Mayors were pleased to hear from their Commonwealth colleagues and looked forward to more opportunities for exchange and good practice from other local government systems calling on CLGF and its members.