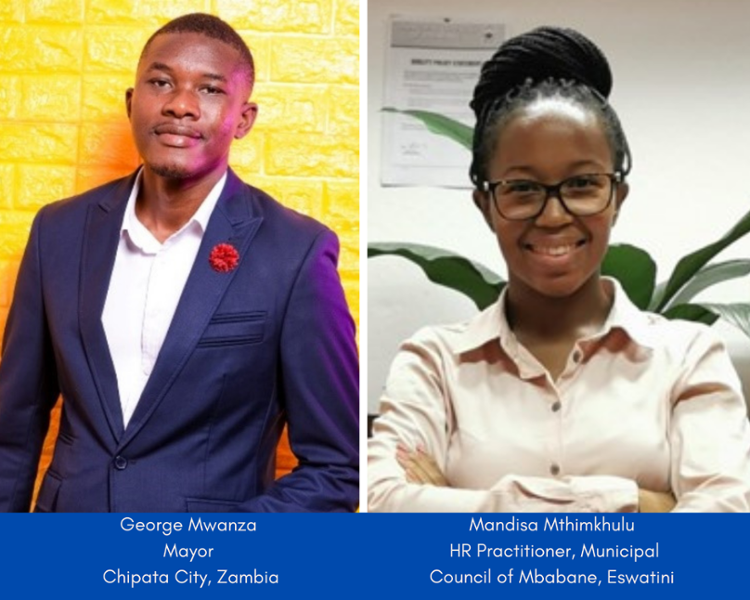 What better way to ensure the sustainability of our future, than to ensure we involve and hear the views of our youth in decision-making. That is why two young people from local government have joined a steering committee to guide the work of a youth network, focused on promoting and advocating for sustainable urbanisation for the Commonwealth.

George Mwanza, who describes himself as a politician, youth activist, patriot, young leader and entrepreneur, realised a long-term ambition in September 2021, when he was elected, and sworn in to serve as Mayor of Chipata City, Zambia. At the age of 27, Mwanza became the youngest mayor to head a city council in Zambia and said: “I ran for mayor to be the voice that has been missing to make decisions for the youth. If you are not a politician, your voice is limited.” He is keen to be one of the people who will promote sustainable solutions to preserve the future of the Commonwealth, conserve natural resources and refrain from making bad decisions.

Mandisa Mthimkhulu, who represents young professional practitioners, works in Human Resources in Mbabane Municipal Council, in Eswatini. Mandisa’s introduction to the group came through her involvement in the project implemented by CLGF and Gender Links. Funded by the Jo Cox Foundation and UK Aid, it partnered young women in local government with counterparts in senior managerial positions in councils as part of a mentoring programme, recognising the limited involvement of young people in many aspects of local government. She is interested in exploring ways to attract, and also retain young people in local government. Furthermore, she wants to change the status quo by having a better generational mix in the composition of local government leadership by ensuring that millennials are hired for positions that involve decision making.

Both representatives are from the African Continent, but will actively seek to ensure that the diverse features of the Commonwealth – capacity; stage of development and needs of cities, urban settlements, and countries; and geographical features - are represented; and to further underpin and ensure collective commonwealth messaging, The youth network steering committee is being supported and guided by CLGF Networks Officer, Janine Xavier-Cross and representatives of the Commonwealth Secretariat and Prince’s Foundation.

Working together, the Steering Committee will lay the groundwork, to:

The youth voice is here…watch this space.

Urban Informality and Inequality: a global call for climate just ...

As COP26 approaches, CLGF has been working with several partners to organise an associated event - Urban Informality and Inequality: a global call for climate justice - to ensure that t ...

All change at the East Africa Forum

Kigali provided the setting for a gathering of prominent local government decision-makers from across East Africa in the first week of October.