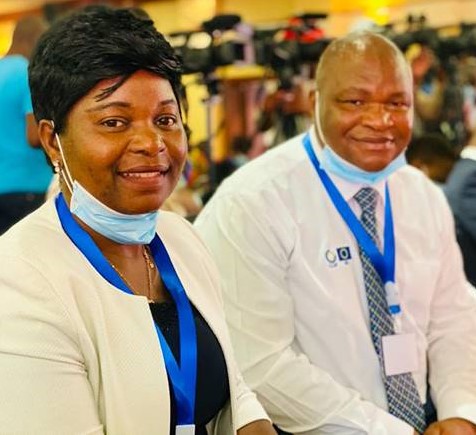 CLGF Zimbabwe has been supporting women to advocate robustly, and play a greater role in local government decision-making, through the Connecting the Dots project. Connecting the Dots is an initiative led by CLGF and partner organisation, Gender Links, and seeks to empower women politically and economically. It is funded by the Jo Cox Memorial Fund and UK Aid Direct.

Addressing the decline of women in local government

Strengthening the voice of women in local government was the focus of a meeting held in December, attended by 350 people, including Zimbabwe’s President, Emmerson Mnangagwa and all the members of the Women in Local Government Forum (WLGF) - politicians and officials. The need for the meeting was driven by growing concerns over the declining number of women councillors and senior managers in local authorities, and the adverse impact this has on decision-making and development and service delivery issues affecting women.

As well as existing research that demonstrates the clear benefits to having women involved in decision-making, especially for the economy, the country’s Constitution also demands 50-50 representation in decision-making bodies. The current electoral system and political dynamics have failed to provide for an increase in women representatives in local government. At national level, 30% of the seats in parliament are reserved for women on a proportional representation (PR) basis. Women are also free to contest the elections in the main elections, conducted on the basis of a First Past the Post (FPTP) electoral system. Unfortunately, elections at local level are conducted solely on FPTP basis. The WLGF argues that the system at national level should be extended to local level.

Developing the advocacy strategy started with the two local government associations - ARDCZ and UCAZ - holding provincial consultative meetings to elicit members’ views and concerns about the issues. CLGF and Gender Links provided the necessary technical support and coaching, so that women could articulate comprehensively and effectively. The strategy from the consultative process was submitted to the Parliamentary Portfolio Committee and WLGF decided to escalate the issue to the President of Zimbabwe, to afford it the highest possible consideration.

WLGF presented a paper to the meeting on specific issues affecting women: access to portable water, health facilities, promotion of education for girls; and called for the introduction of temporary special measures at the local level for a 30% proportional representation quota for women representatives in local government.

Councillor Idirashe Dongo stressed the importance of having this to prioritise the practical and development needs of women, as well as localising the Sustainable Development Goals through policy decisions on education, primary healthcare, water and sanitation, transport and other services.

In his address, the President agreed that women's issues need to be given attention and prominence in national development and acceded to the WLGF request for a 30% quota. He also challenged WLGF to make the meeting with women in local government an annual event.

CLGF Project Manager, Mr Leopold Bhoroma, said: “This meeting has been the first of its kind and a great success. When discussing national development issues, we should remember that there is no development without women. Women are better placed to push for development and this meeting has made this point very well.”

CLGF and Gender Links were recognised for their role in the development of the advocacy paper, the success of this momentous meeting and the general support in the empowerment of women in local government.

Other participants included the Ministers of Local Government and Public Works and of Women’s Affairs, Community, Small and Medium Enterprises Development; the Speaker of Parliament; President of the Senate and other cabinet ministers, senior government officials and Zimbabwe Local Government Association officials.