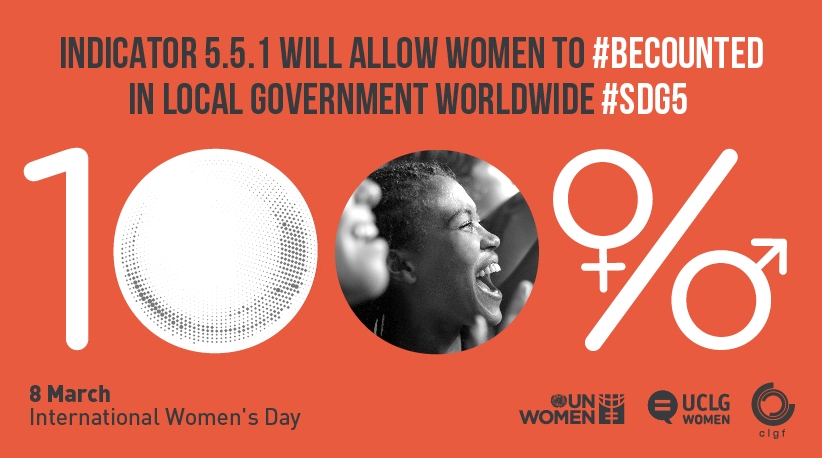 ‘For me, a better democracy is a democracy where women do not only have the right to vote and to elect but to be elected.’ Michelle Bachelet, President of Chile, and first Executive Director of UN Women

It is remarkable that in 2017, when we have seen successful women break through into leadership positions across the Commonwealth and beyond  - in their local communities, in politics locally and nationally, in business and commerce, and in the third sector - that there is still a need to call for gender equality and inclusion in our public institutions.

On International Women’s day 2017, CLGF is joining with UCLG and UN Women in the #BECOUNTED campaign to underline the importance of increasing the proportion of women in locally elected office, as part of the global commitment to Sustainable Development Goal 5 on gender equality and empowerment.

There are many reasons why women are not able to play a role in local leadership – family commitments, party bias, cultural norms and the threat of violence are just some of the factors affecting women’s participation in the political process. While there are some successes - in 2015, according to figures compiled for CLGF’s Commonwealth Local Government Handbook, women’s representation in local government was 49% in Lesotho, 44% in Rwanda and 37% in India - there are still some 12 Commonwealth countries which have local government where less than 10% of councillors are women.

The SDGs recognised the importance of leaving no one behind. By calling on the international community and the UN Statistical Commission to develop proposed indicator 5.5.1 - the proportion of seats held by women in national parliaments and local governments as part of the target to “Ensure women’s full and effective participation and equal opportunities for leadership at all levels of decision-making in political economic and public life,” - CLGF, UCLG and UN Women want progress to be measured at the global level to know where we are starting from, to generate good practice, and to inspire and target support to countries where progress towards equality is slower.

As UN Women head Phumzile Mlambo-Ngcuka said “If you don’t know where to start with the SDGs, start with women and girls everything else will fall into place”.

► Find out more about the campaign

Local government is getting a boost in the Caribbean with an important event taking place from 17 to 19 May in Bridgetown, Barbados entitled - Building back bettet: local government deliveri ...
© CLGF 2022 : Privacy Policy