Circular economy and the role of cities 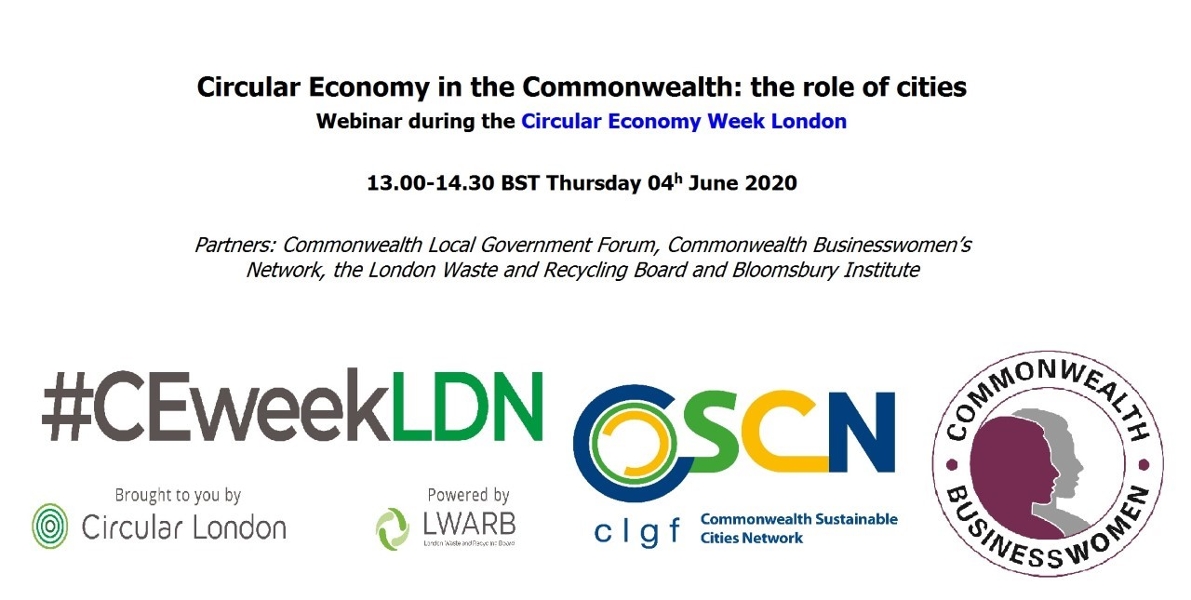 The role of cities in the circular economy was the focus of discussion at CLGF’s webinar last week, as part of the Circular Economy Week London, attracting more than 60 participants from 17 countries.

Organised in partnership with the Commonwealth Businesswomen’s Network (CWBN), the London Waste and Recycling Board and Bloomsbury Institute, the event was opened by CWBN's Executive Director, Arif Zaman. Setting the scene, he advised that the challenges and opportunities from the circular economy are even greater against the backdrop of a global pandemic and recession, as consumption patterns change and ideas of community and collaboration come to the fore. It was vital to look at how cities are harnessing circular economy principles to reduce consumption-based carbon emissions and combat the climate emergency. Very importantly, circular economy strategies rarely include a gender angle. For example, there is a need for gender focused-policies to tackle the impact of hazardous chemicals and pollution on women in various industries.

The webinar featured a video of Sadiq Khan, Mayor of London, who stressed the importance he is placing on the circular economy in London and the work of his administration to make London carbon neutral by 2030.

Keynote speaker, Ngozika Victoria Onyekwelu, from the Africa Circular Economy Network, talked about a project in Zambia, working with smaller cities, local governments, education institutes and other stakeholders to accelerate measurable progress in creating startup and innovation ecosystems based on local priorities and actions. Her organisation is also an incubator for transformational development ventures, working to build and scale the next generation of social impact solutions including the social sector, Agricultural, Sustainable Development, Climate and Eco systems and promoting latest trends in technology.  including AI/ML/Data visualization and Mining tools, wherever possible. We also collaborate with startups and incubators around the globe and help them nurturing and promoting their trade.

The panel session that followed, heard from representatives from Belize, Eswatini and India and was opened by CLGF Secretary-General, Dr Greg Munro.

Dr Munro spoke of a growing optimism about the potential of the ‘circular economy’ as a new model for sustainable growth, particularly in developing countries, Where waste from one process can be an input into other processes. Lower-income countries are in many ways more ‘circular’ than their developed-economy counterparts, but it is important to turn this into a development opportunity. The higher-value, employment-generating opportunities for reuse and remanufacturing are yet to be captured. The existence of circular activities in developing countries provide excellent political ‘entry points’, which could enable governments, the private sector, civil society and other actors to promote innovative economic models.

With rapid and increasing urbanisation - 55% of the global population already living in urban areas, cities account for 85% of global GDP generation and 75% of natural resource consumption. Cities produce 50% of global waste and 60-80% of greenhouse gas emissions. These are symptoms of the ‘take, make, waste’ linear economy. Cities play a central role in the global economy and are creative, innovative centres of growth. Because cities are so central in driving change, CLGF established the Commonwealth Sustainable Cities Network in 2015 to focus on:

Read more about the CSCN and how it enables CLGF members and city/municipal members in particular, to come together to look at key issues relating to effective urban management, the New Urban Agenda and their specific development priorities and opportunities. He gave two such examples: Toronto and the systemic change it is creating through public purchasing power, ensuring the inclusion of SMEs and women; and Cape Town – wi, and its industrial symbiosis programme.

Chandrakant Tiwari, President, Incubation Masters explained that, in the Indian state of Madhya Pradesh, relatively small grants were having a great impact as seed funding. In fact, a couple of startups, supported by CLGF, have helped the local government and district administration during COVID10 by supplying a touchless mask detection system and temperature measurement and contactless sanitisation system in Government offices.

He cited the example of JMART, a grocery, vegetable and services delivery app, which allows the citizens of Madhya Pradesh to collect the religious waste from temples and homes. This is recycled with the help of local groups, who make useful products, such as Incense sticks and compost. This has led to many of the women from these local groups to gain employment.

Hon Khalid Belisle, Mayor of Belmopan, the Belize capital and one of the fastest growing municipalities in country talked about programmes in place to support sustainable economic development, including the Rapid Planning Urban Project, which seeks to develop a rapid trans-sectoral urban planning method, targeting supply and disposal infrastructure. The service sectors covered by the project include energy, water, waste water/sanitation, solid waste and urban agriculture/food.

He talked of the value of the Blue Economy to all Caribbean countries and how, since Rio20, the Caribbean region was poised to embark on a pathway toward sustainable blue growth. This economy currently represents more than 17 percent of the region’s GDP, with the region’s growing population increasing demand for seafood, thus accelerating aquaculture production, shipping traffic and tourism, with new ocean industries will emerge. At the same time, the ecological processes of the sea are changing significantly, due to human activities, resulting from overfishing, poorly planned coastal development, land-based sources of pollution (plastic entering the sea and untreated effluent). He said that sustainability and rejuvenation of the Caribbean marine ecosystem is vital for the region’s economy and in a sector so entrenched in the culture of the people it is imperative for the blue economy to thrive. He said: “Local governments in Belize have moved past the roles of caretakers and maintenance providers, and are actively looking for opportunities to provide services that would increase the quality of life of its citizens through the implementation of projects aimed at attaining the SDGS.” At the centre of all actions taken by the local government are the citizens. He concluded by saying that in this new COVID-1i9 era, diversifying economic activities was vital with a shift towards the circular economy and its focus on service provision being an untapped opportunity for Belmopan Businesses.

CLGF Project Officer in Eswatini, Colisile Tfwala, talked about formerly having managed Local Economic Development (LED) projects for ‎Mbabane Council and, with CLGF support, rolling out a project across the capital to promoted the 3Rs of waste Management: reduce, reuse and recycle. The impressive results included over 100 community members trained in sustainable environmental management and income generation; 940 climate smart gardens established, using the garden produce for food and to sell; waste drop off points established and a recycling centre built; and 450 community members trained in producing commercial products using reusable waste material. In her current role, working for CLGF, she is involved rolling out and implementing LED and, in particular, and promoting and increasing the participation of women in local politics and economic development.

She advised that, with Covid, it will take time for the global economy to operate efficiently again. To recover fast, countries will need to use locally available resources in a sustainable way and eliminate wastage. Formerly imported goods will need to be produced locally wih an emphasis on re-using and recycling. There were many job losses locally.

Dr Munro concluded the session and said: “There is a window of opportunity in which to align the effo

rts of cities, countries, and development partners to the circular economy and also to the Sustainable Development Goals (SDGs) and theand to the is Climate Agreement.  We need a new normal after COVID and if we don’t push for it now we will never attain it.”