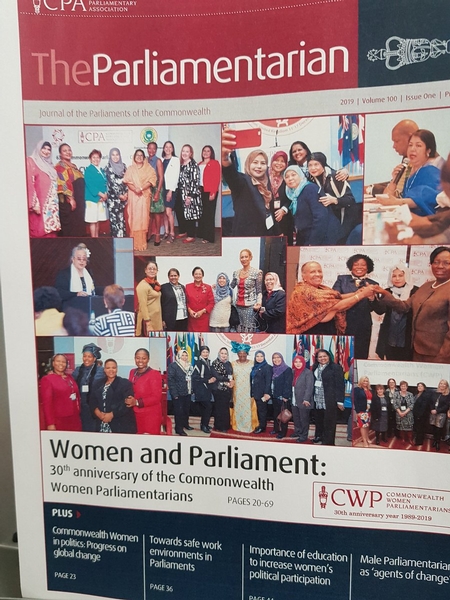 The Commonwealth Women Parliamentarians (CWP) used International Women’s Day 2019 to highlight the importance of gender equality and the urgent need to increase women’s representation in parliament: a mission that is firmly shared by CLGF in relation to getting more women into political roles in local government to be at the heart of decision making.

International Women's Day (IWD) - 8th March - is a global event celebrating the social, economic, cultural and political achievements of women. It also marks a call to action for accelerating gender parity, with the theme of IWD 2019 calling for a more gender-balanced world - ‘Better the balance, better the world’.

Special issue of The Parliamentarian

The CPA, an international community of over 180 Commonwealth Parliaments and Legislatures, is in its 108th year and exists to develop, promote and support Parliamentarians and their staff to identify benchmarks of good governance and to implement the enduring values of the Commonwealth.

CLGF Deputy Secretary-General, Ms Lucy Slack explained: "CLGF and CPA have very similar aims: to increase the number of women in influential, decision-making positions at all levels of government. We had a very successful collaboration with CPA at last year's Commonwealth Heads of Government Meeting, delivering a joint session on empowering women and we look forward to further opportunities to work together."

More information about the CPA and CWP can be found on their website.